SON OF ANNE WILKINSON CUTHBERT, OF 49 CLUNY DRIVE, EDINBURGH, AND THE LATE HUGH CUTHBERT. CHARTERED ACCOUNTANT (SCOTLAND) AND CERTIFIED PUBLIC ACCOUNTANT (U.S.A.). IN BUSINESS IN NEW YORK MEMBER OF NEW YORK YACHT CLUB. BORN AT GREENOCK. His gravestone reads “ From America he came on homeland’s duty call”. His name is on the Honour Roll for Edinburgh University.

Robert Lancelot Cuthbert (RLC) was born in 1868 at Greenock in Renfrewshire as the eldest son of Hugh Cuthbert and Anne Wilkinson. He was educated at the Collegiate School in Edinburgh and Wimbledon School in London, and then apprenticed to CA Patrick Turnbull (SAE 1858) of A. & J. Robertson in Edinburgh. Patrick was a farmer's son who had also worked as an estate factor.

​RLC was a prize-winner in the examinations of the SAE to which he was admitted in 1891. Immediately on qualification, he left Edinburgh for London to work for CAS DDGC. He was unmarried and boarded in East Dulwich. He worked in London for three years until immigrating to New York and practised there on his own. RLC became a New York CPA in 1896 and, two years later, partnered migrant Frederick William Menzies as Cuthbert & Menzies. Menzies was a member of the Society of Incorporated Accountants & Auditors (SIAA).

He was a private in the King Edward's Horse Regiment attached to the 1st Canadian Division, and died in Flanders while on hazardous scouting duty in 1915. RLC was buried in the Plus Douve Farm Cemetery at Hainaut in Belgium.

He was unmarried and had been a keen racing yachtsman and golfer in New York.

There were at least three other children in the Cuthbert family; Robert who remained in Greenock, Scotland and was the partner of William until their company was dissolved in 1846; Agnes, the wife of Andrew Turner, a sawyer and farmer who immigrated to Lower Canada to work for his brother-in-law; and Daniel who is said to have gone to the United States..
In 1828, Cuthbert contracted to ship 300 barrels of cod from Gaspé Harbour to Québec City, which indicates that he was beginning to broaden his economic base.During this period he formed a partnership with his brother Robert in Greenock, Scotland, which operated under the name "William Cuthbert & Co." During the first few years the company operated solely as an import trade, bringing in clothing, foodstuffs, liquor, machinery and equipment primarily from Great Britain...

It is believed that the firm of William Cuthbert & Co. constructed at least 14 vessels in their shipyard at "Duthie's Point" (also known locally as "Shipyard Point" and "Willett's Point"). Two of the largest vessels constructed on the Gaspé coast during the first half of thenineteenth century were products of the Cuthbert Shipyard.They were the Saxon, weighing 787 tons andbuilt in 1846, and the Cuthbert, 914 tons and built in 1848.Robert Cuthbert recruited experienced ship carpenters and workers in Scotland and, during the early 1830s George Carswell and his family arrived in New Richmond from Greenock.He was to be Cuthbert's most renowned ship builder over the next two decades.....
The partnership of William Cuthbert and his brother Robert in Greenock, Scotland, ended officially in 1849, with the agreement being drawn up by notary J.G. LeBel.Andrew Turner, the husband of William's sister Agnes, represented Robert Cuthbert at the signing. 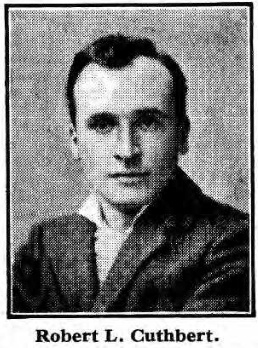