Thomas was born 12 April 1887 in Gourock, son of John Gormley and Agnes Rodger. Thomas married Alice Finn from Campbeltown in 1909; they brought up their four children, Catherine, Agnes, Thomas and Ethel, in Gourock where Thomas was employed as an Insurance Inspector.

A pre-war member of the local Territorials, the 5th (Renfrewshire) Bn., Argyll & Southern Highlanders (A&SH), he was mobilised on 5 August 1914. He served as Sergeant 1890, 'B' Company, 1/5th A&SH at Gallipoli.  Thomas was wounded during the charge of 12 July 1915. Afterwards, he became quite ill and was invalided to the 1st Southern General Hospital, Birmingham suffering from 'sickness severe'. He appears to have returned to his old Battalion and then underwent officer training with the 9th (Scottish) Officer Cadet Battalion at Stirling and was commissioned with the King's Own Scottish Borderers on 17 April 1917. Thereafter he was posted to the KOSB on the Western Front and was attached to the 7/8th Battalion in October 1917 as Officer in Command No. 16 Platoon, 'D' Company.

2nd Lieut Thomas Rodger Gormley, 1st King's Own Scottish Borderers, att. 7/8th Bn - died of wounds 12 June 1918, near Arras  On the evening of 11 June 1918 Thomas led a ten-man fighting patrol, made up of men from 'D' Company, on a successful raid on a German outpost. They brought back valuable information and a cache of bombs, for which Thomas was highly commended. The following evening, Thomas led another patrol but the Germans 'lay in wait for them with a great many bombs and gave them a hot time'; only three got back to the British line uninjured. Thomas Gormley, Sergeant Robert Wightman and Private Ferguson (Lt. Gormley's servant) failed to return. A second party volunteered to go out and search for the missing men. Sergeant Wightman and Private Ferguson were eventually found, both severely wounded. Sergeant Wightman was in such pain that when lifted, he groaned so loudly that the enemy heard him and opened fire on the rescue party. The two wounded men were recovered but Sergeant Wightman died the following day. Private Ferguson had received seventeen wounds but survived; he stated that 'Mr. Gormley had bravely rushed the German post'. Thomas could not be found; it was later discovered that he had been wounded and captured, dying later at a German dressing station. The British Military Mission in Berlin informed his widow Alice that Thomas was buried in Hebuterne Puisieux Cemetery. He is commemorated on the Arras Memorial and Gourock War Memorial. 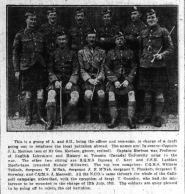 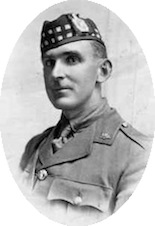